So let’s try to make something different.

Have you ever had an idea on how to promote Litecoin but never had the opportunity to get it out of the paper? Your time has come.

We are here to try to engage people’s ideas around Litecoin. We already see a lot of discussion but we want to see some ACTION!

So if you want to MAKE something you have dreamed about on this LTC community and want to WIN 3.5 LTC. Post your effort here!

PS: If someone is willing to decide a winner with me, just match my investment and get on the board (@Jf7788 and others already joined us).
PS2: Payment is subject to the rules and scope of this hands-on campaign. Please play fair.
PS3: We are adjusting the campaign on the go to make it a pleasant experience for everyone.

I’m a generalist software developer, so if you need something done (a web application, a desktop application, firmware for microcontrollers), let me know. I accept Litecoins as payment.

I don’t know if I was clear enough, but you can make whatever you want to try to win the prize. For example: “I made a game hot-site where you can drive a Litecoin Spaceship to the moon after bypassing E. Musk tentacles.”

You were clear, but maybe you yourself don’t understand how wasteful the competition you are proposing is.

The winner gets 1 LTC, and that’s it. The losers get nothing, and all of their efforts will be wasted. So, competitions are big effort wasters (and even more so when there is only one winner, no prizes for second or third places).

My proposal is “an offline web application that randomly generates mazes”, or some other simple game done with HTML, CSS and JavaScript. If nobody places anything by 29th of July, I’ll join this competition and likely win by W.O.

I hope people think differently and try to see this as an effort to make things better inside the community.

Of course you can discuss the “competition”, but then I kindly ask you to put your skin in the game. Throw 1 LTC and make second and third places prizes.

I don’t have much money and I am doing this to improve LTC, I don’t want this to be wasteful for me or for anybody else.

I am going to make a 3d mascot called lilli litecoin (Or Lilli lyte coyne) Will update when ready.

I will match your 1 ltc donation and we can do first place being 1.5 ltc and .5 ltc for a second place prize if that sounds good to you. @Lite_Diss

We have a deal! From now on prizes are:

@Lite_Diss ans @Jf7788 are together on this. I will update this post asap.

People are matching donations to the contest.

I think this will make people get out of the couch

Buy an iconic London Red Phone boxes in High footfall locations in London. Not cheap though around £25,000 each. Cover the phone box with Litecoin marketing material. All tourists/londoners walking past will see the litecoin marketing.

NFT art is in high demand nowadays. It can be created a Twitter account for NFT artists and made competitions for every month. Most voted NFT (about Litecoin) will be bought for 1 LTC (Price can be adjusted) and will be used as Profile Picture for a month. In this way collectors can show their talents and know Litecoin as supporter of them. They will start to create their NFTs including something about Litecoin so Litecoin is also promoted. This is my opinion. Open to be improved.

Thanks to @Jf7788 and some others. All the funds are already together on this wallet:

My trending meme on r/Litecoin i posted (u/iBanano) 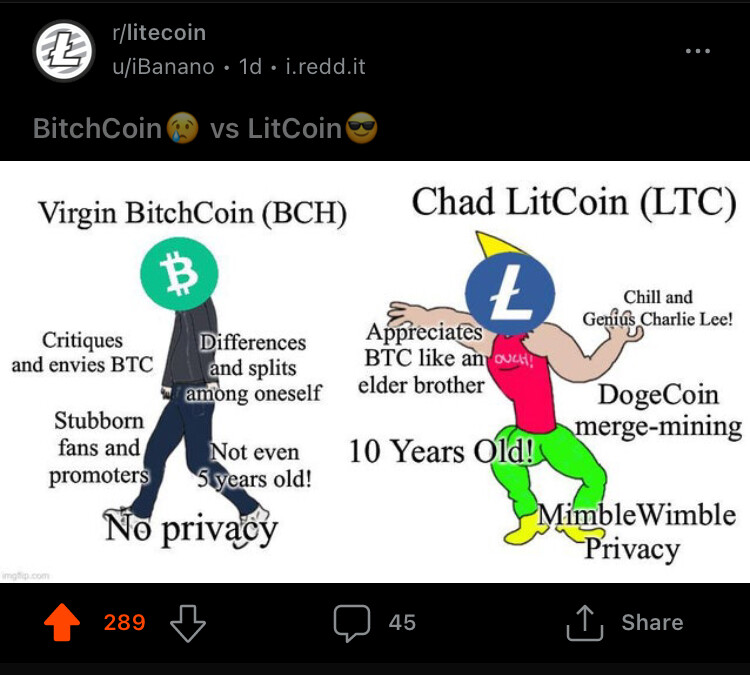 Count me in for LiteCoin Hands-On Campaign

please count me in with my meme on r/litecoin, i got 300+ upvotes… 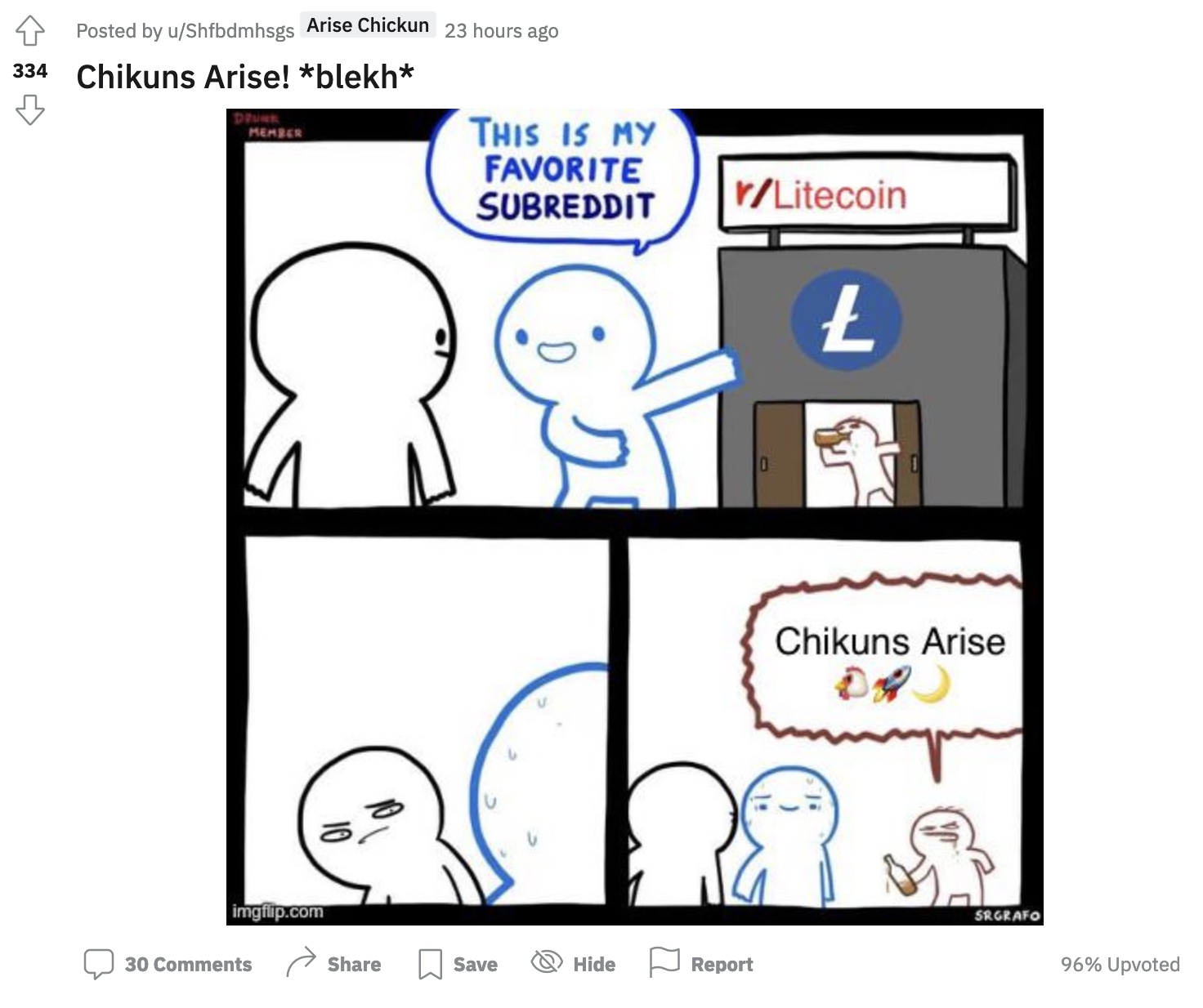 ltc to the moon

chickens ariseeeeee!
I’ll be crossposting my memes to other subs too.

We got our two first contestants! Welcome!

Every entry will be evaluated on the this contest after the due date. Don’t worry!

Aside from the Dank Meme,

Now, some genuine stuff we can do to promote Litecoin…

First thing we can do is decide the primary and main website for Litecoin. As per wikipedia page, we have 2 website i.e. litecoin(dot) org and Litecoin (dot) com .

Third thing, Show the core team who are currently developing LTC on website.

Fifth Thing : LiteWallet and the card shouldn’t be US exclusive, we can expand to more countries.

Cards, etc . Or some similar community theme.Even Sir Charlie Lee’s twitter cover of DBZ goku and vegeta as btc and ltc is dope.

Eight Thing : Litewallet UI can be little more simplified, it does the job but aesthetics and speed can be improved a bit.

Ninth Thing : Emphasize updates such as MimbleWimble and many other LTC features such as that card, speed, tps, digital silver,how it’s like a little brother and similar to BTC etc.
Highlight the applications of LTC.
Share facts of LTC on twitter, clear up some common misconceptions and FUDs that always revolve around LTC.

This way, Chikuns will Arise and we’ll be on moon. And hopefully my comment will go down in good books of History.

Cheers to LTC and Charlie Lee.

Also, Thanks to @Lite_Diss for conducting this giveaway and for making our community active.

I told you everything right )))

I suggest promotional material which incites people or is informative to solidify positive feeling around LTC. See below:
https://drive.google.com/drive/folders/1D_h-uL-KQg_BpYEIpDW0k1-K3-hcuRc9?usp=sharing
I have made this – feel free to share and spread.

I have noticed that many people had trouble logging in/using Litecointalk.io for the last 2 weeks or more. I think we should postpone the deadline for this campaign. Do you agree?

A week ago i couldn’t login for roughly 48 hours but later problem is solved.