Worried about the difficulty increase when the L3+ ship

I would like to get into mining with an L3+ and I would like to at least break even. With the current difficulty I could break even in 30 days but I can not buy an L3+ yet, so I am curious if the difficulty will rise more than 15% by the time the rest of the L3+ (including mine) ship.
Thanks!

It’s the conventional wisdom that you can’t make money from mining, and it’s better to buy coins than miners. I don’t think that’s correct. Certainly, the far-and-away safer route is to buy coins and HODL, but if you’re willing to risk the miner route, the payoffs can be enormous.

Let’s look at the figures - see bitcoin wisdom and look at that huge dip June 7th-12th. That’s a difficulty drop of about 60,000, and it corresponds to a batch of L3+'s (which are by far the dominant ASIC miners around).

Let’s assume that Bitmain are making these things as fast as they can - generally a chip-run is a bargain to produce X chips in total at Y chips per {period}, and {period} here is a month. Bitmain then have to make boards, run-test them, etc. One doesn’t get to change the delivery/month unless one renegotiates the contract, or engages another foundry, so let’s assume things are not going to change too much in the near future.

This gives us a good measure going forward for how much the difficulty is going to change per month - I’d expect about 60-70k difficulty difference per month from now on. I’d expect relatively gradual rises over the month, as bitmain bring the next batch online, and then a step function downwards as the batch is turned off for shipping. Lather, rinse, repeat.

Worth noting: People focus on the %age difference increasing, and that’s not what I think is happening here - we’re way past just anyone linking their bunch-of-GPU’s to the network, so the real increases are coming from ASICs, and they’re supply-side limited. I think the difficulty will rise predictably as the L3+'s come online in an arithmetic series - and it can be modeled relatively well by adding 7000 to 8000 difficulty per difficulty-period, given that there are 8 of those per month (roughly).

With all of that, it’s easy to produce a spreadsheet. Here’s an adaption of one I made back in May, with the above assumptions that models a single L3+ until the end of the year, assuming delivery in September. It also includes the electricity costs (for me, $45/kW/month at my hosting provider) 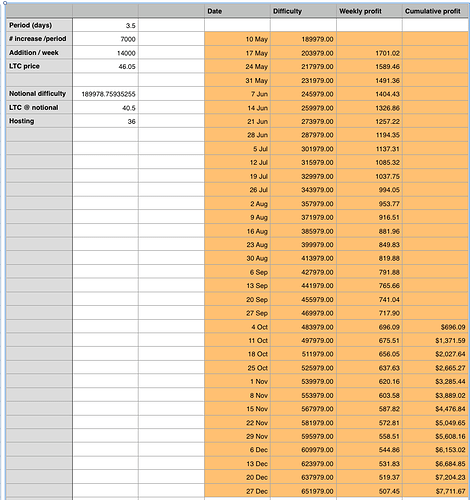 I made this to send to my mother yesterday, since she was asking about adding to my mining farm. It doesn’t assume any increase in LTC price, models the difficulty addition as 7k/period, and uses a starting hashrate / difficulty specification to forecast the returns on a weekly basis.

Now remember this is all just one man’s thoughts on the matter, and although it’s tracking reasonably well so far (on a linear-regression basis, not on values at time-points) there’s lots of assumptions, and lots of places where I could just be plain old wrong.

Still, I don’t think it’s all doom and gloom.

Hi! Cool sheet, I am also interested in this! If the difficulty would not rise as quickly because of limitations from the suppliers that would be awesome!
But what kind of prices/costs did you use for this one? The antminer l3 has risen in prices, but you also need to buy more items like power cord etc? This made me unsure of how expensive the total miner would be.

lcoin, I did not receive my first miners yet, but I guess that all you are going to need in addition to the miner unit itself is a power supply unit, a power cord, and an Ethernet cable to hook your miner to the Internet.

spacedcowboy, I am very interested in your analysis because I hope I will start mining by the end of next Sep. too.

Now, based on the difficulty numbers of the last month running from June 11th to July 11th, I am afraid that your analysis is turning to be a little bit too optimistic, as there was a difficulty increase of roughly 18,000 per week.

So let us see how things play out, but we will definitely need some luck to make our business profitable.

What I meant by the drop in difficulty was the huge dip in the difficulty graph (it’s no longer in the 1-month graph, but you can still see it in the 9-month graph). That was caused (I think) by Bitmain switching off all the miners they had doing “burn-in testing” so they could be shipped out to their owners.

As for the difficulty rise, you may be right. I’d note that if you took June 6th to July 8th though, you’d see a difficulty-rise of 5800/week, which is significantly less than the 14000/week I’m positing in the chart above. Difficulty rises and falls are pretty volatile, so it depends a lot where you take your values from.

One thing I did notice is that my profitability figures are off in the chart above, I was reading the wrong column entry. I’ve got a newer chart I’ll upload when I get around to it, which is a more accurate projection of profit. Spoiler: it’s pretty much 1/2 of the above, unfortunately. On the upside, the coin value itself looks like it might (post August) make up for it

I’m also now modelling a ‘bump’ in difficulty of ~40k around 3rd October to cope with the sudden influx in miners as they’re released. I think this will be a large batch, since they’ve been selling them for ages now.

Great, I look forward to seeing your updated chart.

By the way, may I ask you who your hosting provider will be? Mine will be Giga-Watt.

Any updates on difficulty and profitability projections? On mobile so I apologise if you updated info and I missed it.

I made my own projections and the result is not looking too promising.

Thanks Bear, I’ll continue to remain slightly more optimistic than that, but ow. Looks like I might lose my shirt afterall.

I am sorry to give you bad news.

Are you a miner or a future miner?

I will tell you something positive and yet realistic: the ROI could happen sooner. In my analysis, I assumed that the difficulty keeps increasing at a rate of 22k every three days, but it will probably not be like that because the more the difficulty increases, the more people will get discouraged to engage into the mining business, which will ultimately lead the difficulty increase to slow down.

Does that sound better now?

Thanks again and Yeah it does a bit and that’s what I’m hoping, that difficulty levels off a bit.

I knew difficulty rises would be crazy based on the numbers, how crazy is always the question. I’ve got two l3s running now, three coming end of august and then five in September, and of course, being a glutton for punishment, 2 d3s in November.

I did the gpu thing back in the day and lost my shirt then. Figure this time I should at least break even mainly thanks to the three running now. It’s nice to be able to mine again.

The goal was to use these to position myself to buy new BTC miners at next gen release. Crossing my fingers. Lol.

It sounds like you’re doing what I’m doing. I just ordered the L3+ and I’m estimating an ROI in about 5 months after purchase, but that’s not considering how the difficulty differential and price will change. I figure I’ll at least break even eventually, and I’m just hoping that that will be before the zero date of the next gen miner.

Please check it out.