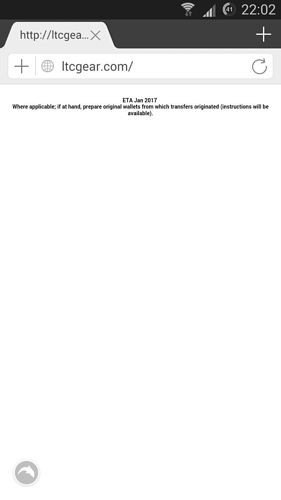 That was big lost for me .

Don’t fall for it (again)

Luckily there is nothing to fall for anymore…

that POS was the best scammer i ever came to know online… he kept fishing and kept scamming even veterans of cryptospace.

Do you think viabtc can work? I mean buying s9 miner and letting them mine with it?

If it was a scam the first time round, it definitely will be a scam again.

What is this? They scammed your money?

any bets on LTC high?

BTW where are all the old LiteCoinTalk admins?

Turned out to be one of the larger Litecoin Ponzis that has existed.

It was a rather large shitshow for sure!

Initially I think LTCGear was a cloud Litecoin miner who then stopped paying out. This person then said that you would be able to upgrade or something, and didn’t actually mine any coins. Then he was asking for some coins so he could release your coins. Basically he was running a ponzi scheme.

If anyone recommends LTCGear to you, please stay away. Do something little, such as recommending LTCGear to another member, and I will ban you.

LTCGear ended up being a giant shithole for everyone, including the mods of LTCtalk.org.

This moment the Ltcgear site is offline…