Litecoin qt encrypted after download(not by me)

I’m pretty sure my situation is a lost cause but I thought I’d shoot you a line anyway to see if anyone ever had this experience.
I downloaded a LTC qt wallet from what I’m pretty sure was the official website. Never encrypted it(almost 100% sure) sent a good amount of ltc to it and realized it was encrypted. I know, stupid! save judgement please. I thought i was crazy but i tried every password i would ever use(3-4). Even downloaded and used the btcrecovery tool just in case.
Has anyone had this happen? Is there malware that encrypts wallet.dat files? Do the developers have a default passphrase?(haha i know, wishful thinking) Could I have downloaded a bad wallet with malicious code? The ltc is still there and I’ve tried deleting the ltc qt and reinstalling a new then adding back the wallet.dat file. and No never made a back before it was somehow encrypted. I even setup a new wallet and then encrypted to see if it would recall anything but it didn’t look familiar and pretty much reaffirms that I never encrypted it.
any words of wisdom?

Can you confirm what whas the website you downloaded from?
Did you verify the sha256 sum of the binary you downloaded? If not, do you still have the original binary downloaded with you?

Also, please tell us the ltc-qt version and the operative system you are using.

Will try my best to figure out what is happening to you, and I hope you are not lost.

thanks for responding. unfortunately the original i no longer have because i’ve been testing a number of solutions like redownloading. But i looked through my history and i definitely went to the official litecoin website https://litecoin.org/. The downloaded output from verifying the sha1 is
SHA1(/Users/davidkane/Desktop/litecoin-0.14.2-osx.dmg)= fcc0e57b7ad3627230930eae27808c10dd0c8d17

Okay, so you are using Mac OS.

Could you upload a screenshot of the window that asks you for the passphrase? Does this happen when trying to spend?

Yes, it’s a Mac and it ask when I want to send. I’m not at my computer anymore but I can send pic tomorrow. I’m on Eastern standard Time. 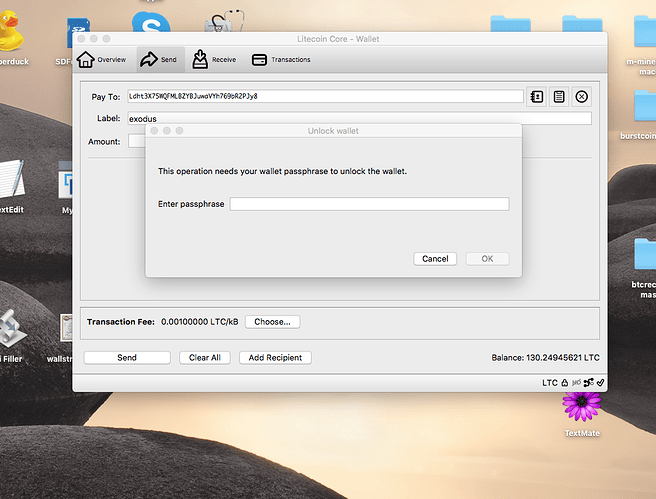 just so you know I’m not crazy! it appears this has happened to a number of people.

Hi, I have downloaded Litecoin core wallet and it has never asked me to create my own passphrase. I only have the possiblity to change the password, but it is of course asking me for the actual one. How is it even possible this can happen? Unfortunately, I already sent some LTC into this wallet. The wallet was downloaded directly from litecoincore.org. Anyone else experienced this? Many thanks

I installed the Litecoin Core Wallet on windows and due to memory issues was unable to complete sync with the network. As per advice in these forums I moved the wallet.dat to another pc, updated the blockchain successfully and received my litecoin. But when I attempt to extract (Send) coin from wallet I am prompted for a passphrase. I never set up passwords for the wallet during install or ever activated the "Encrypt Wallet’ functionality, which incidentally cannot be deactivated within Settings…

can anything be done about this? Could there be a passphrase that you guys have for releases that you’ve been testing that may have been downloaded? I have over 130ltc trapped.

I have seen those cases.
However, if we are not able to (step by step) reproduce the issue, no one will be able to fix it.

I am not a litecoin-qt developer but, exploring the source code at https://github.com/litecoin-project will lead us to determine there is no default passphrase.

I understand that. I just wanted to reiterate that this is occurring and it’s not just people forgetting or losing their passphrase. I take full responsibility in my carelessness in not completely testing it ahead of time but it should be something made aware of as a possibility.
thanks