Why there’s so little (publicly shown) love for Litecoin LTC?

Why do you think that is the case? We get to see BTC, ETH, and altcoins getting attention but not LTC.

Ever since inception Litecoin has been in the top 10 on Coinmarketcap, whilest many coins have come and gone.

BCH and BSV wars tried to solve what Litecoin had already solved. Litecoin is sound money, settles fast, low transaction fees and limited supply with the next halving coming up in just 2 years. Both BCH and BSV dropped out of top 10 and will die a slow death over time.

However I do believe that Charlie Lee selling all this LTC at the top late 2017 did put a dent into it. Having said that, given the halving schedules and LTC never got hacked, LTC will continue to raise in value over time.

Just HODL put your LTC into an interest bearing account, earning LTC and enjoy early retirement soon. Check BlockFi and Celsius and make sure to earn in LTC as that forces them to buy LTC to pay the interest to you ! 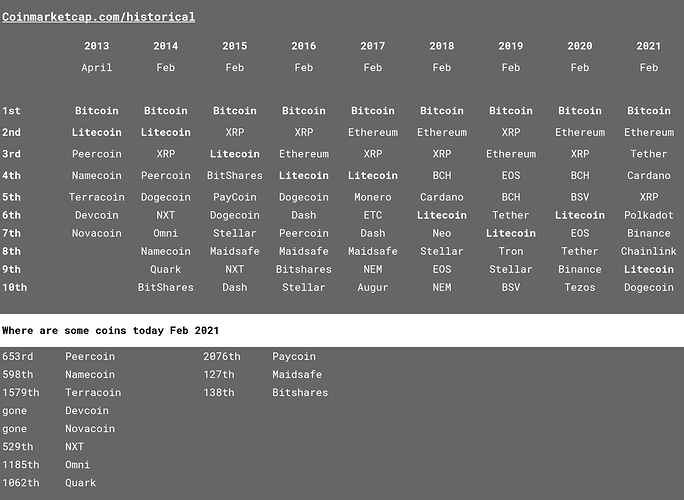 It’s always confused me to, when I started out looking in to it, lite coin was up there with ethurum and bitcoin. Now I rarely hear it mentioned but still holds its place