What is causing the LTC rally?

Hi there, I never found out what causes the sudden increase of cryptos’ prices (I believe it is often more than one factor, but it’s just an assumption). LTC is doing great lately, but do we know why? Please don’t ■■■■ storm me if it’s a silly question

I was recently wondering the same thing. What drives the price of crypto? There is no business creating products or services, driving revenue, creating value. It seems the only demand is people buying and selling to ride a wave of price fluctuation, hoping to make money. What else is the reason for buying crypto?

Genuinely curious here… I have been considering Litecoin as my first crypto investment for the last few days.

What drives the price of the US dollar?
The demand for it, and it’s scarcity. Demand will be higher based on how many people accept it. And scarcity is self explanatory.

Unlike the US dollar, BTC and LTC can’t be printed, so over time the scarcity and price will go up slowly. Larger price swings should be completely determined by demand.
Some demand is just there to make a quick buck, some may be for laughs, but a lot is due to adoption of cryptos. Because if everyone accepts it like they do the US dollar, you get something with the same demand as the US dollar, but cannot be inflated so the price goes up and up.

I think what drives the daily price (for the most part)
Is speculators, the kind that speculate on how potential future adoption is going to go, and the other kind trying to ride a wave.

In some ways crypto is a currency like any other. It’s value changes relative to that of other currencies. For example, when LTC increases relative to the dollar, it’s not necessarily “worth” any more, it’s just that people simply believe LTC is better to have than dollars. There are times when LTC is up relative to the USD in certain period, but not as high as BTC. In such a case LTC is up in terms of USD exchange but still down in terms of BTC exchange. Currencies are only as valuable as the faith society puts in them. As long as you have stuff I want, and are willing to take the currency I have, it’s value goes up. So as more people and companies adopt certain cryptos, their values will increase.

Right now governments look at crypto holding as “investments” for tax purposes. So if you buy a quantity of LTC using dollars, then the LTC (relative to USD) value goes up, you are taxed if you change your LTC back for dollars. But did LTC really go “up” or did the dollar go down? Isn’t it possible that a stable crypto like LTC simply held its value while the government-controlled USD (which can be printed like Monopoly money at the whim of politicians) simply lost public trust? I think it’s very likely. So when the government trashes the value of its currency while you’re holding crypto, you’re not really making money, you’re wealth is simply in a better asset for storing value. Inflation on the USD was about 2% last year while the best savings accounts only offered 0.5% APY. That means if you were storing USD in a savings account (maybe saving up for a major purchase or saving up to pay off a debt) your money lost 1.5% in value on a good day! While if your savings was in crypto, your value was more stable (because stable cryptos can’t be printed and distributed at the whim of politicians). When you go to buy something, typically you have to exchange your crypto back for USD which crates a tax liability for you (even though it was the government’s fault it’s own currency is crashing). Now, if a company accepts crypto directly, you don’t have to lose money by exchanging for USD before the purchase, and the company benefits because you can then afford more of its product. Another reason crypto’s adoption as a payment method will increase its value.

The last reason crypto will go up in value is speculation. In about a month millions of Americans will get their tax “refunds.” For months they have been broke while watching people “get rich” on crypto and they will want in on the action. Of course BTC will jump because it has the largest name recognition - millions of unsophisticated investors with thousand of freshly created USD will all be clamoring to get some. Sadly this will create a spike at best because once bills become due and game systems become available (and more dopamine-releasing than long term investing) those masses will cash out of their crypto and the value will drop. This is another reason adoption will increase the price stability of crypto. If those masses could buy into crypto and then use their crypto to pay bills and buy PS5’s then the value of crypto relative to the USD would go up and stay up; but because they will be getting into crypto then having to convert it back to USD, it will cause a spike in crypto’s value relative to USD. And other coins will spike too. LTC’s value is correlated to that of BTC because they are very similar in nature.

As long as government-printed currencies continue to lose value, stable coins will continue to be more valuable. As long as crypto values go up, there will be speculation and thus price spikes. But the more cryptos are adopted as payment methods, the less volatile they will become.

I hope this helps.

I think what drives the daily price (for the most part)

I wrote a post about it, maybe helps in this search for value in crypto.

Litecoin is the coin for payment and transfers in the crypto world. Bitcoin as the investment we save and Litecoin the value we bring in our wallet and let in our bank account. Litecoin takes advantage of Bitcoin advances as the codes are almost...

Excellent write up agreed. BTC, in high demand, has also driven up its fee to purchase. Grayscale has also significantly increased its LTC buying. Mainstream companies like PayPal that offer LTC are just the beginning, etc. 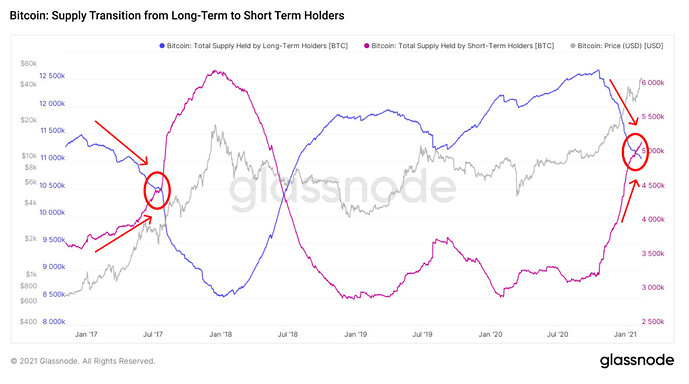 I think the main driver for LTC now is retail entering fast. Seems that LTC is very sensitive to retail and that is a good moment to increase LTC/BTC proportion IMO. I think LTC can outperform BTC in the middle and the end phase of bull mkt, as euphoria take place in the end.

But this time can be little different as we have many institutional investors adopting BTC. Let`s see.

Inspired in our conversation here, has written one more text about the moment for Litecoin: https://bitcoinvalueresearch.substack.com/p/the-impact-of-retail-investors-on

Powerful analysis! Thanks so much.

FIAT bubble will release lots of “gas” into the crypto bellow before the FIATBUBBLE will burst … which will be sooner than later… EZB just “made up” 7000 bn. new EURO … utter foolishness …

It’s because since yesterday my portfolio is 100% LTC and God loves me.

Buy LTC now before pump or you gon regret.

What rally? I bought 1.25 Litecoin in Jan 2018, and it’s roughly worth what I paid for it right now. If I had sold it last week, I would have made $25. A $25 return on a 3 year investment is…well, better than my savings account, for example. It’s much better than having lost it all, but I wouldn’t exactly call it a rally. I don’t mind either. I guess I could sell it, but I never put more in than I was willing to lose, and I would genuinely like to see all of the rosy predictions that I read here come true.

I think it’s a rally since December of last year.

That’s great if you’ve made money. I sat in the red for 2 1/2 years. It was only a couple of months ago where the value of Litecoin matched my initial investment, which (thankfully) wasn’t all that much. Again, I’m not knocking Litecoin. I want to see it succeed, but I managing my expectations.