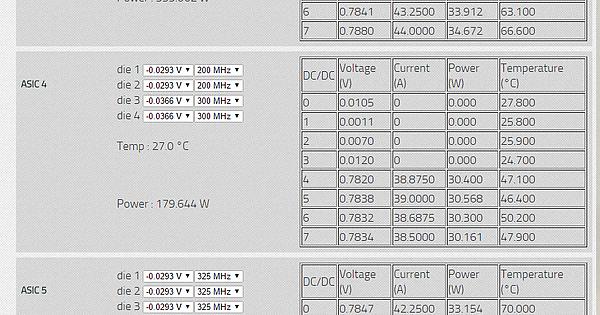 Start by taking all cubes off the controller, powering up, and see if it reboots.

If so, controller needs fixing.

If not, shut down and add one cube. Power up. See if it reboots.

If so that cube is bad.

If not shut down, add another cube, repeat.

Okay i did this but still reboots every few minutes but the DIE’s after i reduced them all to 250 mhz and did volt 3 then almost all dies are online now but still keep rebooting every few minutes, also i sent you a PM with the WHITE light coming up before 3 green lights

Gentarkins software isn’t going to bring a dead die back to life; but, if you have that die turned on it might keep stopping and restarting in an attempt to bring the die up. Turn the dead die off and you might be good to go.

i mean isn’t running the miner on DCDC around 60-70 CELCIUS pretty good?

I also reconfigured my PSU’s and spread them wider and added 1 more to have 2x cubes = 1 PSU + 1 cube + controller = 1 PSU + 1 cube = 1 PSU so it would definitely not be a current problem so total 3 PSU for 1 titan
also checked my clips which i use to start the PSUs and found out if they are badly inserted they can cause false die IDK why but i figure something to do with the currency not flowing good enough or something
so, in the end, i got just 1 totally dead die i tried increasing v decreasing MHz several times and no change
so I just turned it off

now it runs stable at a good hash rate and i couldn’t be happier : smiley:

On a Titan one dead die out of four cubes is rare so count yourself lucky. Glad it worked out for you.

can u sell me a titan motherboard ?

Well, if your board is broke I can fix it for …2btc but I would recommend getting a Neptune board, running my code on it, and donating 10ltc to me or a week of mining time for the time I spent hacking it all together.