Proposal: A move to ethash/ProgPoW once Ethereum completes it's transition to 2.0

Let me start by saying that current LTC miners are going to absolutely hate this suggestion, but hear me out.

It comes down to this fundamental question: How do we, the Litecoin community feel about decentralization?

An opportunity is about to arise for us in a year or so. Ethereum is moving to PoS and basically abandoning Ethash. Meanwhile ethash is a proven algorithm. It has proven to be immensely resistant to ASICs. Even if you have an Ethash ASIC, your advantage over GPUs isn’t that large. There are also a crap load of Ethash miners out there. Orders of magnitude more than Scrypt. It is far more decentralized than we are, objectively speaking.

Additionally, a LOT of work and effort by the Ethereum Foundation and others has gone into developing and auditing ProgPoW, which is even MORE resilient to ASIC miners (which again, are mostly the chip manufacturers themselves, unless you happen to own a few acres of land and can simply compete with chip manufacturers that have the latest and greatest, by having exponentially more of the last generation running). All of this hard work developing and auditing ProgPoW remains unused.

I’m not talking about changing block times or sizes either. Ethash/ProgPoW can be made difficult enough to target our usual 2.5 minute block time.

If we were to adopt Ethash or ProgPow once abandoned by Ethereum, we will have a more decentralized network, and be the top cryptocurrency using it. We will arguably be more secure than we are with Scrypt.

Change is hard to accept for many, but we have at least a year to think this one through, all I ask of that we consider it. The switch really wouldn’t take much work, I don’t mind even submitting some preliminary pull requests of the change. I argue this change will drastically be to our benefit, with minimal risk as this is a tried and true algorithm.

TLDR: We should consider adopting the hashing algorithm ethash/ProgPoW once abandoned by Ethereum as that is more decentralized than Scrypt, with way more miners out there. Difficulty can be adjusted to target our 2.5 minute block time still and wouldn’t require that much work. It would make us the top cryptocurrency with that algorithm so security concerns are basically null.

Wasn’t ASIC resistance and decentralization (beyond BTC) an original reason to be for LTC? I thought Scrypt was supposed to keep mining in the hands of the many, not the few. I think massive decentralization would be a great thing. Will ethash prove to remain ASIC resistant into even the near future?

Hence LTC mining would move from many to a few = less decentralization.

Keep LTC mining as is. It has kept LTC in the top 10 crypto ever since while many others have come and gone.

Also LTC has a wider audience = better distribution than all other top coins such as BTC. Don’t mess it up.

Agreed that there are still farms and even farms selling the hashrate. However if you look at the cost of a 51% attack on crypto51.app You’ll see the amount you can rent is incredibly small. 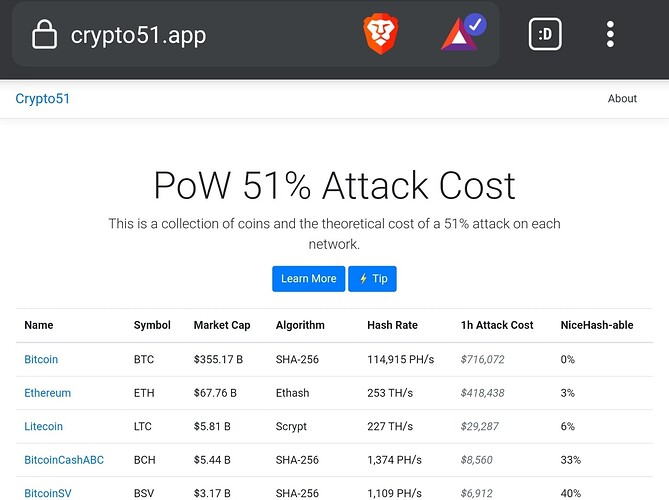 It’s small for Scrypt too. The difference between why it’s so much cheaper to theoretically 51% attack LTC over ETH is the sheer number of more people GPU mining over Scrypt ASIC mining.

Scrypt was meant to be GPU mined but ultimately failed. The only algorithm that has shown even more ASIC resistance while being around for a long time is Ethash.

Being able to woo those GPU miners over to our chain when ETH has completed its transition would not only be good for us on a security level, but also get more LTC into more hands, and thus even more adoption. Win/Win.

I argue we should take it a step further and use ProgPoW since so much work was done researching it.

This will be a good test on the adaptability of PoW chains. Can miners give up their power for the betterment of the chain? Do PoW chains need more governance than simply following what miners decide?

Honestly this discussion will solidify my thoughts on all of that.

Please do what’s right, I’d rather not start a fork situation. Scrypt no longer serves the purpose it was intended to serve. Litecoin was always meant to be GPU mined. We have a unique opportunity to get back to our roots here…

Scrypt needs to be abandoned for a memory based algorithm if you’re looking for any sort of asic resistance. The ethash is a good idea and truth is a lot of those “asics” are now less efficient than the newest gpu.

If there is really a desire to boost the litecoin community this could be it as when eth does switch there will be a ton of miners looking to transition, this could grab a ton of new users and bring them into the litecoin world and give them a well supported long-term coin for their hashrate.

There exists an opportunity for ProgPoW to be used after ethash is retired on Ethereum. Don’t make me fork Litecoin to do it

I’m sad that this can’t even be a discussion.

I don’t see a real reason behind the change. ETC will remain using Ethash.

Litecoin has been running for a long time, way before ETH. Do you think this actually make any sense?

What a weird idea. If there is no catastrophic reason to do it (e.g. hash algorithm is flawed), then hardforking just to completely change the mining algorithm is a very bad idea. The original network for sure would keep running. Why wouldn’t it? Miners have invested in the hardware, everything is running fine, there is absolutely no reason for anyone to leave the network. You can hardfork the network, but I wouldn’t expect most of the community to follow. And even if they would do, the minority number of nodes can still run the original network with unchanged hashrate and dump the forked coin on the first occasion. So, you would just create a new coin with predetermined coin distribution…