I am glad to hear that you took some time off. Been a healthy and unstressed coder is must have ‘feature’ to have quality and secure development. Many thanks for the progress update, I am sure must of developers here understand the tedious process of merging code.

Completion will be huge for LTC. Good job, and thank you for keeping us updated here.

I choose LTC as my No.1 crypto because of you and @coblee . I believe in you both 100%. Great work! Thank you

By “we’ve accepted”, what I really mean is Charlie has, since he generously chose to pay for this audit. We are very fortunate to have him around

Excellent update as well, great to read about the rollout and new audit

Keep up the great work David

Thanks for your work. Regards Piotr

Progress! LTC is wonderful! We need an excellent spokesperson and publicist! It works so well!

Is the audit still planned to be completed by Mid October?

Thank you, my man!

no news this month ?

hello, last news was Aug 3, 3:14 AM. we will get august updates on September.

delay on the release is starting

@litecoingva @David said he was merging code from 0.21 and take a look. For your surprise: https://github.com/ltc-mweb/litecoin/commits/0.21

He is indeed merging code!

Last month I merged the node code on top of the LTC 0.21 release codebase (see July update), so this month began with me merging the wallet code. It turns out that a lot changed in the wallet between 0.18 and 0.21, so I had to spend a few weeks redesigning how we calculate and manage MWEB addresses and keys. The end result was even cleaner than we had with 0.18 though, so this turned out to be a good thing, despite requiring the extra effort

For the code monkeys among you, the majority of the changes were in: scriptpubkeyman.cpp, mweb_wallet.cpp, and Keychain.cpp.

Aside from that, I had a lot of bugs and tests to fix as a result of the merge, which I was able to do just in time for the auditors at Quarkslab to include in their review. On that note…

I’m working very closely with one of the Quarkslab auditors now. She has been going over the code and is in the initial stages of testing. We were able to get her synced against mainnet, and she also requested I create a testnet for them, which they’re now connected to and experimenting on.

While we’re now merged on top of 0.21 release code, we actually haven’t even released 0.21 yet

. I was asked to take over managing this release, so I spent the past week getting that release code ready. Assuming I can herd the other devs together (which is a lot like herding cats), then I expect we’ll be able to have 0.21 released by my next update. This will include, among many other things, support for Taproot

Hopefully we can get 0.21 adopted quickly, and miners signaling for Taproot, because the following month, I’ll be cutting the release for MWEB (which I’m calling 0.22-ish until someone gives me an official release number). The release date for 0.22-ish will be highly dependent on the results of the audit, which won’t be completely finished until mid-October. So while we’ll remain optimistic for an October 31st

release for now, write the date down very lightly in pencil, not pen

Ryan Wright is an absolute baller. While I was searching for a quiet street corner to live (see: background), he swooped in with a 100 LTC donation just before I listed my house on the market

All additional donations collected will continue to fund me for future development projects. There’s still so much more I want to do: Dandelion for P2P-level privacy, CoinSwap support, syncing improvements, Atomic Swaps, watch-only addresses, MWEB support for hardware wallets & light clients, and much, much more. So still chip in whenever you can

David. We would love to keep funding further development. We appreciate the long hours & late nights! Along with the continuous updates.

The taproot launch then the MimbleWimble upgrade are exciting advancements on the litecoin network that will bring in better signature/contract capabilities & scalable confidential transactions. 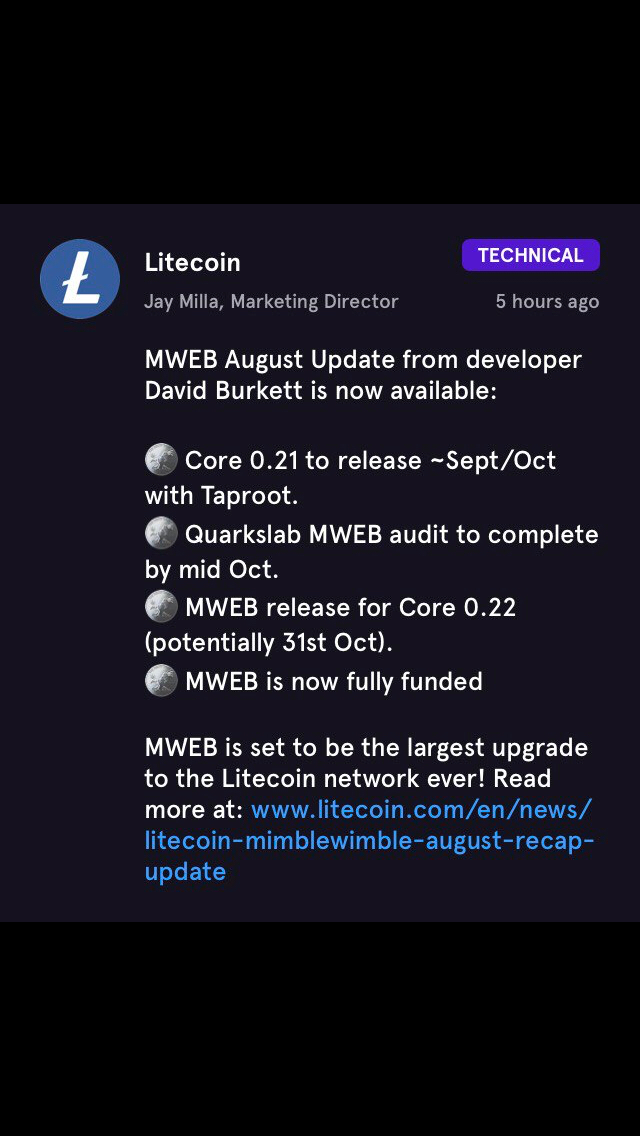 I was hoping to have the v0.21 release out already, but I’m waiting on one last developer to review. A couple of us have already run through a test build to make sure our environments are setup correctly, so once everyone has signed off on the code, we should be able to get a release candidate built and signed fairly quickly.

The most notable change in v0.21 is the inclusion of Taproot support. The Taproot logic is the same as in bitcoin, but activation will be done differently. We chose to trial the mechanism we’re planning to use for MWEB activation, which is bip8 with lockinontimeout set.

Soft fork activation can be hard to follow at times, because there’s a few different ways it can be done (BIP8, BIP9, UASF, etc.), and activation takes place through a number of steps or “states”, that aren’t usually explained well for non-technical users. I want to make sure everyone can follow what’s happening, so we’ll walk through the process for activating taproot.

Each block has a version field, which miners can use to “vote” for soft forks. Miners will be using a small part of the version field to signal for Taproot activation.

Every 8,064 blocks, a new “window” is started. At the end of each window, nodes tally up all of the blocks that signal for a feature, and if the total meets the defined threshold, the feature “locks in” for activation in the following window. In our case, the threshold is defined as 6,048 blocks or 75% of the blocks in the window.

So here’s how this will look for Taproot:

I hope this is easy enough to understand, but if any of it is unclear, the full BIP8 spec is available here.

I met with the Quarkslab auditors Wednesday for a mid-audit check-in. They’re wrapping up their static analysis of the code, and have found very few issues so far, which is very encouraging.

We also discussed priorities for the remainder of the audit, to make sure the most important pieces are thoroughly covered.

For the next few weeks, one auditor will be focusing on manually testing, trying to make sure it works as expected, and more importantly, trying to see if they can break it.

The other auditor is knowledgeable on cryptography, so will be focusing heavily on the one-sided tx design (LIP-0004) to make sure we didn’t miss any attacks that could compromise key integrity, lead to tx malleability (i.e. allowing someone to modify a transaction that they aren’t the creator of), or any other number of security issues.

Hi David. Thanks for the update & hard work. What a great idea with taproot activation.

We appreciate your focus & consistency to making litecoin the best currency for the people by the people.

You are THE best