I was transferring my Litecoins from my exodus wallet to my electrum-ltc wallet and they seem to have disappeared or went to the wrong wallet and I was hoping someone could help me.

When I was creating a new electrum-ltc wallet, it went through the initial setup process and created a seed which I wrote down. Then the electrum wallet opened, and I copied the address

and send the litecoins there. It never showed up in the electrum wallet, even after hours of waiting. So I tried to reenter the seed that was given to me and electrum-ltc on my computer was saying that there was an error connecting to the blockchain, so I gave the seed to a trusted friend who was open to open it and it was a different wallet completely with 6 previous transactions and a 0 LTC balance.

The address of the seed is giving me is:

Which has 6 previous transactions, and 0 LTC. All of which aren’t mine.

I’m not entire sure what has happened and wanted to see if anybody in the litecoin or electrum-ltc community could help me solve this. Even if I am unable to get my litecoin back, the fact that I have someone else’s seed is a huge issue. I would be willing to share the seed with mods if necessary, since there is currently 0 LTC in it, but the transactions are recent and it could still be active.

the first address has 6 something coins, is that yours?

A) you made a mistake or two when setting things up.

B) You may have downloaded electrum-ltc from a malicious site (and so another person previously did the same as you).

C) In some way, you just won the lottery. It is possible (but improbable) that electrum-ltc gives two persons the same seed. Like… 1/2^128

Can you verify what I am suggesting? Also, let’s check your addresses to see what’s there.

this address has 3 ltc balance… this is yours right?
https://chain.so/address/LTC/LSSKiMJ7gCDgoZk9dyKHq9anhQaSwAMJJD

Here there are 6 something LTC… this is supposed to be yours right?
https://chain.so/address/LTC/LiCHq2cBjiyfQCSBow8gUTDSNBwgv8uQJw

this address has zero balance, but also no transactions…
https://chain.so/address/LTC/LafoG2o3Kocsxt56gweCQezUVV1o8yU3T7

so, you make a mistake or something, but dont deleted the files of the electrum wallet. 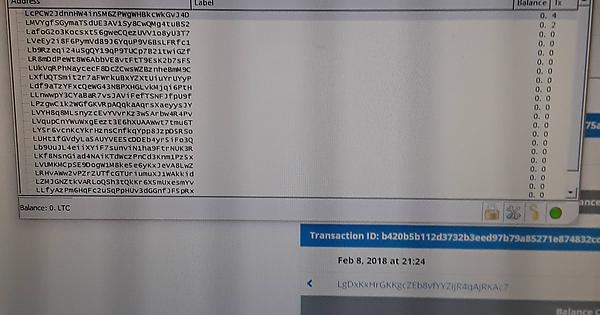 Here are all the addresses affiliated to that wallet

You can see the transactions on this address: LcPCW2JdnnHW4in5M6ZPWgWHBkcWkGvJ4D

My exodus has 3 new LTC because a friend sent me some because I lost the other, I do not have the 3 LTC I intended to send to myself.

When I was trying to access my electrum wallet after I made it it kept saying it couldn’t synchronize to the blockchain, so I sent my friend the seed to try to recover and thats when we noticed we had access to a different persons wallet. (he installed a virtual machine and installed electrum-ltc on it and entered the seed)

LiCHq2cBjiyfQCSBow8gUTDSNBwgv8uQJw <- this is the address that received my 3 LTC, it is not my address! It has 6 LTC now, 3 of which I thought i was sending to myself.

Hello, I was transferring my Litecoins from my exodus wallet to my electrum-ltc wallet and they seem to have disappeared or went to the wrong...