Wouldn’t it be nice to put your tax dollars to work trying to educate more folks about the pros and cons of the crypto world (for lack of a better term)? One of the main reasons I was drawn to crypto is my concern about the US debt and spending policies. Yet those that want to hold on to the current financial system, including several of my friends, have said that bitcoin is rat poison and its intangible funny money, unlike the mighty dollar that is backed by the Feds gold reserves. I think those days where the dollar was tied to a tangible asset like gold are long gone and a little disingenuous to say the least. I dont claim to be a financial guru by any means, and Im sure there are legit reasons for a government to be concerned about crypto, but I believe we should be free to invest our hard earned coin how we believe is best for us and our families future.

Recently the US Treasury Secretary Janet Yellen has voiced her concerns about the use of bitcoin at a NY times Dealbook conference. She said:
“I don’t think that Bitcoin, I have said this before, is widely used as a transaction mechanism. To the extent it’s used, I fear, often for illicit finance. It’s an extremely inefficient way of conducting transactions. And the amount of energy that’s consumed in processing those transactions is staggering.”

I pulled this quote from an article from the dailyhodl.com that does a great job addressing the Treasure Secretaries concerns and worth a look if you have time.
US Treasury Secretary Has Several Concerns About Bitcoin, Addresses Need for Digital Dollar | The Daily Hodl

I think the Treasure Secretary underscores the need for more information to reach the masses about the current state of crypto, how it’s evolved in the last 5 years and what huge potential the future may hold.

501(c) is a tax status given to not for profits within the US administration.

All it means that they have special reporting requirements (to the IRS) and that donations could be tax deductable for the donor/contributor.

Want your USD to do good? Donate to the litecoin foundation

IMHO the main concern of Janet and friends is they will be out of a job in future because it will be automated by a smart contract.

The points on her concerns are valid except the energy consumption one. Is crypto accessible for the everyday investor? No. But neither was the internet in the 90s.

I dont mind making a donation to LiteCoin, but I was curious about tax deductible options. So my money that would normally be headed to uncle sam could be rerouted to a crypto nonprofit. I wasnt sure if anything along those lines currently existed.

I’m not sure the real concerns, but I certainly dont think its energy consumption or the fact it can be used for illegal activities. I imagine not being able to print out coins might be one of them.

To be honest, I imagine one of the biggest concerns is simply the fear of the unknown.

Have a look at the Pineapple Fund and Giving Block then, I believe these are tax deductable donations: 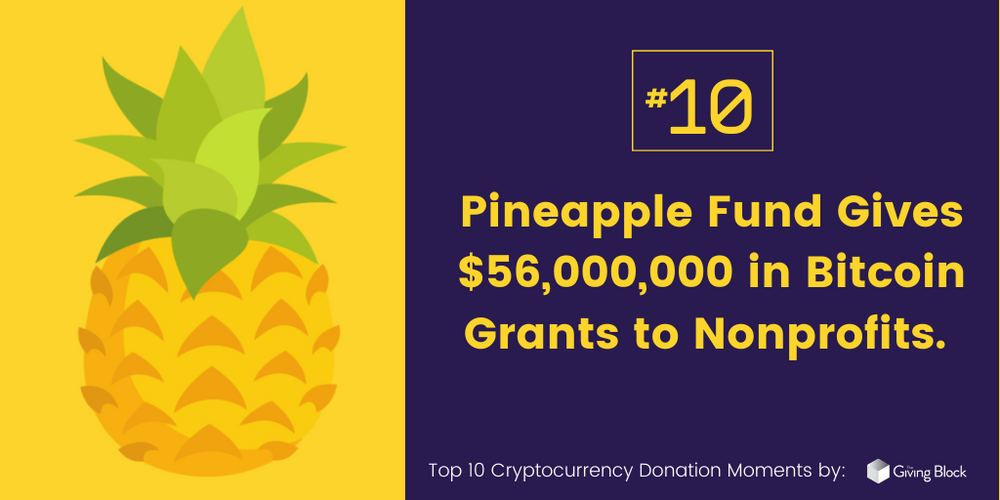 On December 14, 2017 a post was made on Reddit that would forever change the landscape of charitable giving with cryptocurrency....

If not I can recommend EFF, Free Software Foundation, and MAPS. Have a look.

Its a cryptocurrency for social good that’s been around since 2013. They have a webinar on their site you can take a look at.

Thank you both for the recommendations. I will take a look this weekend.

I had this very same question, and I’ll tell you there is not. So i started my own. When it came time to filing I had trouble describing just what the nature of my business would be so I went with just that, A non profit centered around the education of financial technology and literacy for the digital age. Ironically enough, when it came time to set up an account for my NP, Bank of America paired me with one of their “Bitcoin Specialist” lol. Needless to say family, we are the chosen few, create yours while you still can before the Big Corps come down and start spreading FOMO & FUD.