Earn LTC if you help me "redeem" this LTC Transaction!

Because I thought my Trezor Hardware Wallet was compromised, I took my assets off it so I could wipe it clean. In the process I sent 20 LTC to my Electrum-Litecoin Wallet. 24 hours later it’s still in limbo and shows as “unconfirmed” on the Electrum wallet. When I check the blockchain, it says the transaction is “not yet redeemed.” 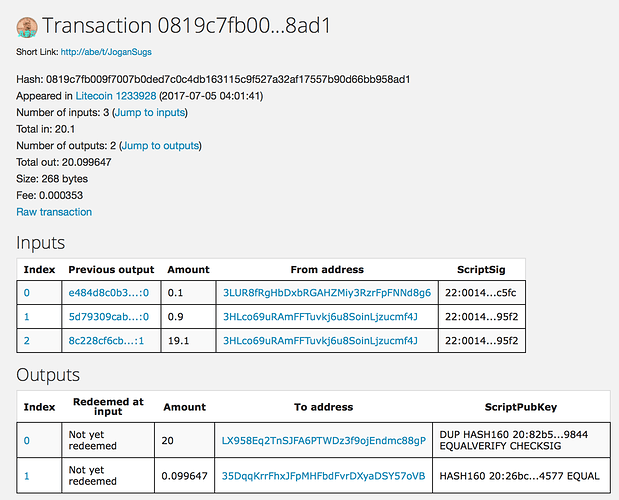 If there’s something I still need to do, can someone coach me through it? I’ll tip you in LTC if you can make this happen.

Your TX is included in block 1233928. It is has gone through - it is not in limbo… If you have not spent the 20 LTC in the new Electrum address LX958(…), the website will show “Not Yet redeemed” … since you haven’t spend them yet…

For Electrum-LTC, please use the new 2.8.3.5 version - the 2.6.4.2 version is 1 ½ yrs old… The new version is an adaptation of Electrum 2.8.3 for bitcoin. I can vouch for it, it supports Segwit. In addition, if starting from scratch, leave some time for the blockchain headers to download (about 15 minutes) - the file should be > 98 MB. Even if the bottom right dot is green, it doesn’t mean that the file is downloaded fully. In Windows, the file is stored in APPDATA/Roaming/Electrum-ltc, in OSX and Linux, check the “.electrum-ltc” hidden directory.

EDIT: If after about 15 min having the Electrum-LTC started, your coins are still un-comfirmed - click on the green dot (bottom right) and manually change server. If that doesn’t work, stop Electrum-ltc, go to the electrum-ltc folder and delete the Blockchainheader file - it is most likely corrupted. Start Electrum-ltc again, watch the file being downloaded above 98MB and then check your coins again.

Thanks, Lazio! I’ll try this out in the morning. Pls give me a “donation” address.