I sent 120 LTC to a BTC Nano S wallet on accident and it has been stuck for over a month. I tried to contact coinbase to cancel transaction but they said they couldn’t. I thought after 30 days it would return but has not.

Im very busy with work and not very tech savvy so name your price and lets see if we can get these. 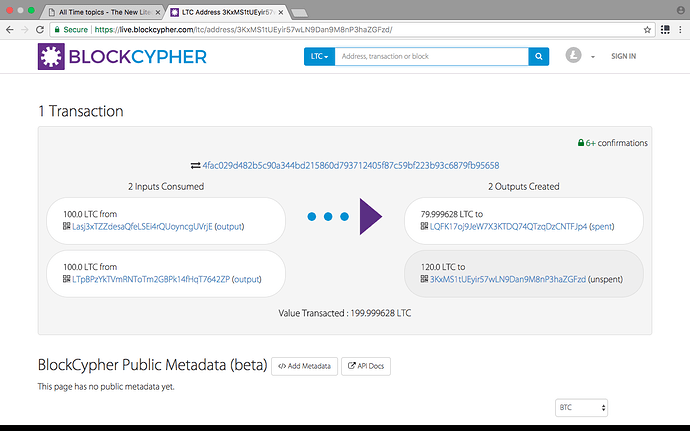 the problem here is that the sending wallet is not yours,

question, is the BTC address yours right?

So, you sent your LTC to your Nano Ledger S wallet 's BTC address, is that correct?

Since you own the Nano Ledger S device you can certainly recover the LTC but it’ll require some technical know-how. I could help you out with this by helping you step-by-step if you want that.

About a price: I leave that up to you and I don’t even want you to feel obligated to pay anything.
That said, any reward will certainly be greatly appreciated. It’s your call.

If you need help, feel free to contact me.

I have trezor and I did that mistake twice. They have a coin recovery tool and it worked.
Not sure if Nano has something similar but do your best to pursue them to help you out.
And if it works, make sure to take care of them.
Good luck

I have the same issue. I sent 10 LTC to my ledger blue BTC address. Happened to me 3 months ago and I have been talking to a lot of technical people. There is no solution for this.
I am afraid your coins are lost forever.

Not true, Akke ^^ walked me through the process to retrieve them. It took about an hour or so if you go through the steps.

Seriously???
How does it work??

I will send him a pm

anyone in here know where I can buy nano ledger s in finland?
no stock anywhere I looked

Mike99, I see a lot of comparison in your story with a story of a guy on bitcointalk a while ago. Aren’t you the same person? The guy there wrote the exact same story and also asked where to buy a nano legder s in finland. It sounds like a lot of coincidence to me.

If you’re the same person then you are incorrectly explaining your issue. The guy on bitcointalk sent LTC from his ledger blue to a BTC address of bittrex. It’s totally different to TROM6’s case because TROM6 owns the RECEIVING address. When sending it the other way around (like in your case, to an address of bittrex) the owner of that address is bittrex and only bittrex can recover those coins.

If you are the same guy then I know you already contacted Bittrex and you were told they can’t do anything about it. But all I can say is that they can, theoretically, but there might be company policy preventing them from doing things like this maybe. I don’t know.

I have a strong feeling you’re the same person. If you are then please try to convince Bittrex or accept the loss.

If you’re not the same person, please explain your issue in more detail please and ignore all the above

I had to re-register. It kept telling me I can only send 3 replies in a thread because I am a new user. wtf?? It practically forced me to create a second account

yes I am the same person asking about this on bitcointalk before.
I don’t get it

why can TROM6 restore his coins while I can not?
in both cases it were OUR coins that were sent to a wrong address

Is bittrex a scam then ? Or why isn’t it working??

TROM6 sent LTC coins to a BTC address of his own nano ledger s. Since he owns the nano ledger s he had the key to the BTC RECEIVING address and with some “tricks” it was easy to recover the “lost” LTC.

I know you already sent emails to them and they said there’s nothing they can do about it. The fact is, they can, technically at least. But I assume their company policy forbids most of the workers access to any private key. It wouldn’t be safe if everyone there has access to private keys.

So they would need to call one of the bigger guys with higher access rights in order to do something like this. Time is money so they will send you a big invoice and if their invoice is more expensive than the coins you want to recover, there’s no point in doing this.

I think this is the reason why bittrex is not helping you out.

I can’t believe I lost 10 coins.
you say they can do it
bittrex say they can’t help
NOW what do you think of bittrex is a scam website - AVOID!- WITH PROOF!!

I don’t think bittrex is a scam. It’s an exchange and there are many exchanges worldwide. Bittrex is one of the bigger ones, known, used by many people.

That being said: you should never store any coins on any exchange for an extended periode of time. They could get hacked overnight or disappear with the sun… If that happens, your coins are lost. And it did happen in the past, both scenarios, it’s certainly possible.

So if you have a big amount of coins on any exchange and you aren’t actively trading/selling/buying with all of them, then I would advise to move coins at a safe place instead.

But this doesn’t make bittrex a scam or anything. It’s just a bigger target for hackers so it’s less safe to store coins on any exchange.

It’s different for everyone. Whatever you call a big amount should be stored safely.

has bittrex ever been hacked in the past?
You’re scaring me by telling an exchange can get hacked
I thought they are the safest place because they have all the experts in-house

I don’t know Mike99. Google is your friend

But since they are still around nothing mayor happend I suppose. And past incidents don’t tell anything about current/future security measures. I think Youbit was the most recent exchange that went backrupt after they got hacked back in december last year.

I don’t really track this. I’m not a trader myself and I rarely use an exchange.

Just don’t store large amounts on them. Better be safe than sorry.