I searched this forum but could not find a solution.

My old computer crashed and I recovered a wallet.dat file from 2013 in a new Litecoin Core wallet on a new laptop. After a rescan I re-opened Litecoin Core but it does not show a balance. It, however, does show 1 incomming transaction (in history). The status shows: “0/unconfirmed, not in memory pool”.

Thank you so much in advance

post the transaction id and/or the address that is listed in the wallet.dat file.

The transaction does not seem to be LTC (perhaps WDC, is there a way to check), although the address is (blockcypher), right? hmmm…

that is not a valid transaction ID - I ran it on blockchair which ran the transaction id against 17 different block chains and found no match.

are you able to post a screenshot of where you see it as a transaction id?

I get it from the overview (wallet > transaction details)

hmm - well it should be LTC the part you covered looks to include “LTC” - will keep looking more though.

looks like your earlier guess at WDC was correct - the txn id relates to a WDC transaction hash for 1,486.2847037 WDC - of which it is still unredeemed 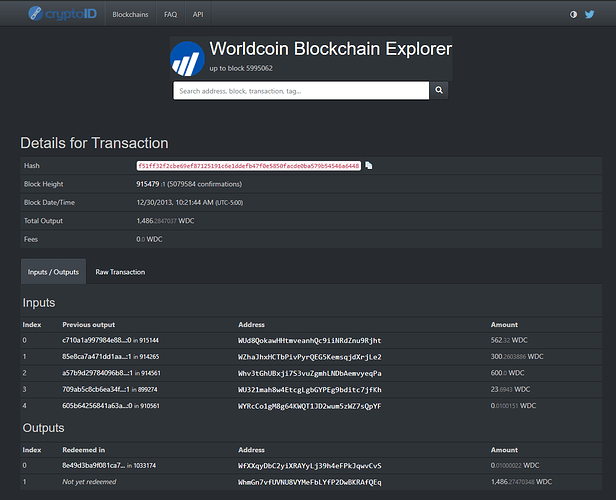 Ahh that makes sense. Thanks so much!!!
If by any chance you can also advice on WDC (i am aware this is a LTC forum haha)… the official WDC wallet is quite outdated and gives errors installing. Would you know of any alternatives?

Worldcoin is a dead coin as far as I know. Even the WDC acronym is used for another coin “Wisdom Chain” Also, Worldcoin seed nodes were stopped years ago as far as I know - though if people are running the full node, you might be able to connect to them. Not sure where to get a full working version of the qt wallet though as the devs stopped working on it in 2016 if I recall.

If I find out more, I will post it here.