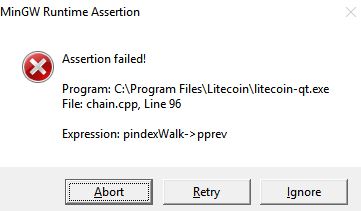 Anyone can tell me what to do I have sent some litecoin from an exchange to address I did reinstall not sure if My wallet is good? first i need to get wallet running, if I saved my wallet do I copy it in after getting it running? thanks!

reinstall and replace the wallet.dat file in the appdata folder with your backup and rename it wallet.dat…should sync without a problem…looks like your folder that contains the blockchain data may have a bad sector in it or something… and if you have already done that start qt form the command line with -reindex -rescan flags
you can also just delete your appdata folder completely and then start qt again…then close it and replace the backup then reopen it…does the same thing as reindex rescan only without current data if you just deleted it

You should look into getting a Trezor, they added Litecoin support. Ledger nano S also did but they are out of stock and hard to find. I’m using Trezor for LTC and it works great. If you don’t want to use their trezor website you can use the trezor on electrum wallet too.
I used to run full nodes all the time, only stopped when the Bitcoin fork threats started and I started using hardware wallets. I’d recommend them to everyone especially anyone new to crypto, for security and ease of use it’s really a win win. They can also be used for U2FA which is a more secure form of 2FA and Trezor also has a password manager, so they aren’t just useful for securing Crytpo conis. Well worth the small investment.

trazor uses seeds and is hackable using brute force…they already got hacked and a bounty of 30 bitcoins is still out there to catch the trezor hacker…just download qt and save it externally and just tell litecoin-qt to save the chain data on the external drive instead of the appdata folder…create a folder on the external drive named data and then start litecoin with a batch file containing the following: start litecoin-qt.exe -datadir=data

can you give me commandline startup for windows
?

got it, from command run start with C:\Program Files\Litecoin>litecoin-qt.exe -reindex -rescan

in command prompt cd to where you have qt installed then type litecoin-qt.exe --help