Apart from Bitcoin, no other crypto in history has stayed in the top 10 longer than Litecoin. 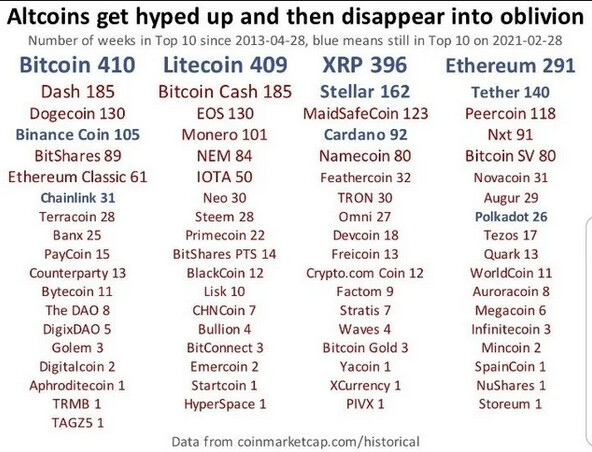 Wide spread adoption is the key to success.

Yeah tbh I don’t think it’s going to last much longer in the top 10 unless it gets back to its ath and gets moving from there. I love litecoin but it’s struggling.

I don’t think this matters too much or means anything.
XRP has been always there, too…

Market cap is not really a good measurement. See dogecoin. Or TESLA for that matter.

How important is the relationship between Supply Cap, and wide spread adoption to everybody?

For a real world example… “I care very little that the Iranian dollar is used and accepted globally, and or convertible to anything else, because 1 usd equals 42,000 ” … an Iranian dollar millionaire, with a modest $24 usd.

In a similar way, Ethereum to me is a dog with fleas… although it’s arguably one the most scaled and used/accepted crypto currencies - there is no supply cap… and the worst part is all of this coveted “wide spread adoption” is just Ethereum being burned into new coin creations…
Many soon to fail alt coins are simply the bastardized insurance policy for Ethereum - … Why would the insurance not fail with it? Solution: “ohh shucks. Let’s just print more Ethereum, as much as we want because obviously demand will be unlimited”

If that’s what wide spread adoption is, or worse, acceptable as… we may as well just sell everything we own and become Iranian Trillionaire’s … or live on the nonexistent moon of gingerbread man world… the same moon Dogecoin strives to reach

don’t get me wrong, but the only trading law we have is:

what does that means? Litecoin is lagging behind and Litecoin “holders” are eager to sell as soon as it reaches ATH and fall behind again.

Then speculators are going to get those coins and make everybody to paid more than before.

That’s not accurate. Respectfully.
A “speculator” in its truest form means you are actually betting a future outcome… and that can only really be done through Futures Options trading… and trusts, kinda.
Litecoin holds an exceptionally strong premium value- a 500% premium with Grayscale, after they doubled their investment up to apx 300mil.

The speculators value Litecoin a lot more than you think. And pay a higher percent to play.

As for the rest of the world, buying and holding a few coins, is speculation too- but compared to the former- is kinda like peasant squirrel’s squabbling for acorns.

Maybe we kinda disagree, but not really. I do agree with both posts you made.

I was trying to make clear that reaching ATH is not the really an issue right. I frankly think LTC will eventually get there, because LTC is not being abandoned by anyone.

Some people are saying “will hold”, but they are not as soon as ATH comes.

Top 10 according to Market Cap?