I am considering to get 10 L3 miners. I can get them in 3 weeks at 1300 usd with the power supply from Bitmain next batch (shall ship in august).

Would you consider it a good investment considering the difficulty increase in the coming months vs buying Litecoin?

what is your thoughts on this?

Take the money - buy Litecoins instead. You will have a much better return if going long.

Thanks you, how do you base on your assumption ? That the difficulty will be rising making the hardware unprofitable ?

I have fairly cheap electricity so i am factoring this into the game… (i am in china).

How do base my assumptions? 4 years of experience… Even if electricity was free - buying directly always trumps mining.

EDIT: if you want to export wealth out of China, then mining is best: ie. you use local currency to buy equipment and electricity, convert it into Litecoin or Bitcoin and export the coins outside of the country, by-passing currency export constraints in China…

I am asking cause based on my current calculation if the price of Litecoin remains stable the gain for 10 miners L3+ will be $30,812.25 for one year. However if the price increase the gain will as well be exponential.

Please check the simulation i get over 365 days. 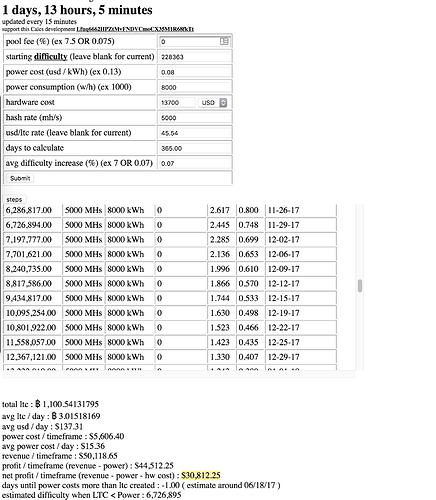 So would like to understand if i am missing something in the calculation.

Thanks for your input Nerios.

Given the big price jump, I would imagine the difficulty is going to increase by more than the 7% you’ve assumed. That said, I’m new to mining, so you should definitely view my opinion with scepticism. Good luck!

what do you think of this price ?

See my reply in the other thread

If you get it hosted at Giga Watt at 3.3c kwh or somewhere trustworthy with cheap electric that should help dramatically offset the difficulty rise, that and and of course a rise in the price of LTC. Giga Watt ICO is still ongoing https://cryptonomos.com
They are sold out of L3+ but you can order from Bitmain and have it shipped to Giga Watt. Just buy tokens in the ICO, then go on Giga Watt site fill out the form and check the box that you own tokens so you get the lower rate 3.3c kwh with no hosting fees. When the L3+ stops making enough to cover the electric costs you can still rent your tokens out other miners to generate income if you decide not to upgrade to a newer miner so the tokens still have value. There are other places with cheap electric that host, but make sure they are reputable. Giga Watt is most reputable I know of, and their instagram shows the build out is going fast https://www.instagram.com/gigawatt_mining/
I have seen other offers with lower electric costs on bitcointalk but I don’t trust them since they aren’t really companies just people offering to host. I’d be weary about sending mners without knowing whom I’m sending them to. Also it should go without saying but just in case any newbies read, cloud mining is a scam all of them. Either a ponzi or a rip off. Having someone host your own miner isn’t cloud mining, stay away from cloud mining. I was one of the LTC Gear victims

Why don’t you already own LTC? Better upside than Bitcon and less drama and no chance of chain split.