Cannot access my LTC, but can see it on the blockchain

I can see my LTC on the blockchain…I have the public and private keys (created at blockcypher.com), but I do not know how to SEND it to an address where I can access usability. I’ve been through blockcypher’s documents, but is too advanced for me…very techy. Please help if you can.

Download a digital wallet and impot your private key into that wallet…also called sweeping of a paper wallet…once you enter your private key you can send it to another address…go to litecoin.org…download the for wallet for your device and once the blockchain is finished syncing you can import your private key in console under help/debug menu/console by typing importprivkey (followed by the WIF format private key)

Thanks! That is great. Question…what is meant by ‘followed by the WIF format private key’? Is there a space after importprivkey? Any special format for the command? I didn’t see importprivkey in the available commands under help. please advise.
Thank you,
j

Ok, just to be clear…can I use http://gobittest.appspot.com/PrivateKey to convert my Private Key to WIF…and then perform the command to import my coins? Is this save? Once the command is entered with the coins automatically be imported into the wallet?

But I would go to loteaddress.org and once your there…move your cursor till it reaches zero…then click the tab “wallet details” and enter your private key in that…click view and use the compressed WIF key it spits back at the bottom right of the page…
However if it says what u entered is not a valid key…then you need to calculate your key to another format at that point

Got a response of ‘null’ with the compressed private key after the scan.

Looks like it worked!..even though it reads ‘null’. Can I buy you lunch? Send ltc wallet address!

You are more than welcome to donate to my pool at : LMt5ReEzUK9oH8fsmfTSbpLyRK1CBjtsCv

Or just take a visit to the site and check out my cpu miner web app…I am paying out in Litecoin, Bitcoin or Monero to mine the monero blockchain…here is the site:

I am also not against you sending a donation to Litecoin talk on my behalf as well:

Donation to keep the forum running

To keep the forum running smoothly, we need your support. The following is the donation address: LLSYSrtJ4mGNonuGcysQXMGqFYwY5s8jcn Any amount will be appreciated. If you have donated and want to have your name on this page, please send me a...

I am glad you got it worked out…

Do you have something that I can read so I understand the mining process, data usage, what is needed, what I get out of it, etc. I’m really clueless.
Thanks,
J

litecoinpool.org/beginners-guide
this is the pool I have my ASIC’s pointing towards…but you should be able to find just about anything on Wiki…

look up most anything on public/private key cryptography…and one thing I have been learning a whole lot form is Ken Serriff’s Bitcoin the Hard way…for when your ready for that…here’s the link: 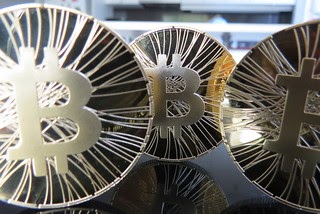 All the recent media attention on Bitcoin inspired me to learn how Bitcoin really works, right down to the bytes flowing through the netwo...

Mining is a little different than how address’ are created however…in bitcoin there are per programed keys that are set for transactions to be sent to with in a certain time period (10 minutes for bitcoin 2.5 minutes for liteocin) then after however many transactions add up during that time assuming the node is still open anyways the algorithm either accepts a full block of 12.5 coins for bitcoin and/ or 25 litecoins or completes the block pay amount up to 12.5 for bitcoin and 25 for litecoin…

here’s my concern…I’m not expecting to make a million bucks here…but I have a potential limitation…I us satellite internet because I’m out in the sticks (woods)…I’m limited on bandwidth (30gigs per mo). If I have a machine working 247, I’m curious how much bandwidth that would use. If you have any idea, let me know. I may just give this a try for a day and check my bandwidth and see if I can keep it up. Any thoughts?

Mining does not require lots of bandwidth to connect to most pools…some pools don’t allow lower difficulty ranges though(smaller packets)…full blocks are very very large in packet size…as computers can only read binary so a block is many more bits or would require a very large amount of bandwidth to send all of the information in one packet…however…the difficulty of finding a block is measured by the average probability on finding an answer or the requires bits of information to be guessed as an exact hashed match for confirmation…pools send smaller peices of blocks out, they get solved, and put back then the whole block gets turned in…

however every “answer turned in” or “hash” is a potential block answer as well because like bitcoins current difficulty for example is ‎1,158,240,270,835 which is the number of possibilities for answers (hash matches)
bandwidth of 4G can send 4 gigbytes of data yes but you have to understand how the pinging works when it comes to mining speed…when your computer sends a call out it sends 2 packets, then 4 , then 8, then 16, then 32, then 64, then 128 then 256, etc…until it times out…then it goes back to the packet size when it did not time out and sends packets in that size over the connection of how ever fast you have…example at my house I have 5 Gigabytes of bandwidth but only 30 megabits /s second download and 15 upload…on a 100gigabyte Ethernet connection or 5giga byte WiFi.

I can point all my miners tethered through my cell phone to a pool; with no problem as long as I have a decent signal…

Do an Internet Speed test…there is one on google that pops up when you search “internet speed test” and its very accurate…as long as you have an okay upload of 6-10mb/s or higher then you shouldn’t have any problems connecting to pools. Unfortunate though that if you have a 30 Mb/s upload and a 5 mb/s upload you have an average connection speed on full duplex of 25mB/s.